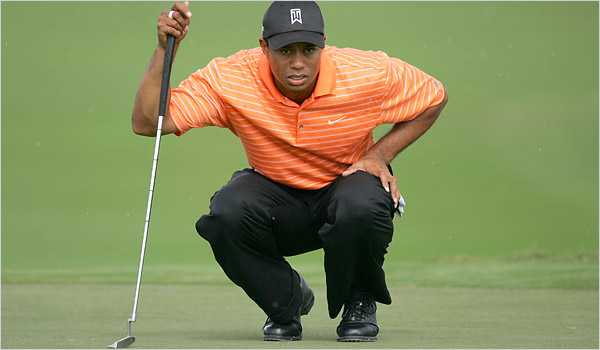 Tough day on the links.

A four bogey round does not get the job done at Firestone Country Club. Tiger Woods added three birdies to limit the damage, but he was not pleased with a second round 71 at the WGC-Bridgestone.

Tiger said, “I didn’t hit the ball well. I didn’t putt well. I didn’t do anything well. The only thing I did well was I fought hard. Grinded hard. Unfortunately, it wasn’t very good today.”

Tiger was especially displeased with his putting. “If I would have putted like I did yesterday, which is just normal, it’s a 2, 3 under round. But I missed a bunch of putts under 15-feet, and they weren’t even close, that’s the problem.”

In his third event since back surgery, it will be difficult for Woods to contend on the weekend. However, he continues to believe there is a chance to win, so I wouldn’t bet against the greatest closer of all-time.

Woods said, “That’s the attitude you should have. If you don’t have the attitude that you’re going to win, why compete?”

When asked if he could shoot 65, 65 over the weekend, Tiger added, “Absolutely, absolutely. You’ve just got to go ahead and do it. It’s certainly gettable out there.”

Tiger is currently at one-under total (T25), ten back of Sergio Garcia who made seven straight birdies on the back nine en route to a 61.