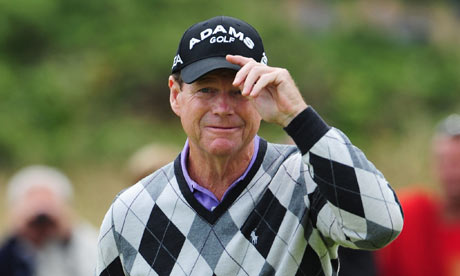 Five-time Open champion Tom Watson found the magic once again. He followed an opening bogey with five birdies throughout the final round for a 68. At one-over for the tournament, Watson is currently T53.

Watson said, “It does give me encouragement for the Senior Open. I don’t know anything about the golf course, but it’s fun to finish with a birdie and finish the way I did, and get ready to go to the next tournament.”

The questioning after the round quickly turned to the Ryder Cup, and Captain Watson will have a few difficult decisions with the two biggest names in the game not playing well.

“Ask me that question September 1st or September 2nd when I make the three picks. If Phil and Tiger don’t make it in the mix there, I’ve got some real thinking to do. Everybody is thinking that I’m going to pick them automatically. I can assure you that I’m not going to pick them automatically. I said about Tiger that I’ll pick him if he’s playing well and he’s in good health. And Phil is the same way. If he’s playing well, again, how can you not pick those two?”

One of the main opponents for the U.S. Team in the Ryder Cup will be Rory McIlroy. Watson believes the 25-year-old has a great chance at winning The Open, but he isn’t ready to say the championship is over. “The luxury that Rory has is that he’s got a six-shot lead. He can have exposure and still be ahead, be in the mix, still be ahead. When I had the lead playing — I was trying to stay out of the bunkers, I was playing smart golf, and I’m sure Rory will be playing it, too, the same type of golf. You expect him to win, but you just can’t say, yeah, he’s going to win.”