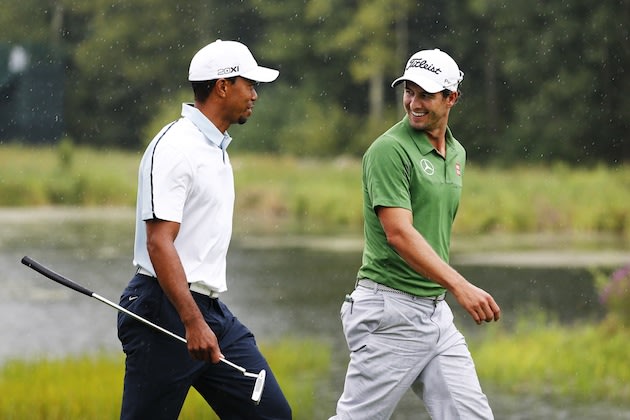 Adam Scott is the number one golfer in the world.  Since 2011, Scott has had three wins on the PGA Tour and seven top 10s in major championships.  At the Crowne Plaza Invitational, he said he celebrated his achievement with close friends on Monday, and he will be looking to retain his number one ranking moving forward.

Scott surpassed Tiger Woods to get to the top, but Tiger’s run in the early 2000s put his dreams on hold:

For a while it was really off the radar for me.  Only the last couple years, I felt my game was elevating to a point where it was an achievable goal again.  I mean it’s quite a journey, it really is, from when you are a kid dreaming.

Will Scott be able to stay atop the rankings?  No. 3 Henrik Stenson at the BMW PGA Championship and No. 4 Matt Kuchar at the Crowne Plaza have a chance to pass him this weekend:

I’m going to obviously try my best.  I have to not think about the rankings too much like I was telling you before.  I didn’t focus on the rankings the last couple months…and tried to downplay it and just get on with playing golf, and I think that is what I need to do now.  There’s a lot to achieve still this year.  There’s an event this week and obviously we are getting into the lead up to the next major championship of the year, which is a big focus for me.  So, I think I just need to get on with playing golf, enjoy this week, and I enjoyed Monday night celebrating with some close friends.  You got to do that to understand otherwise everything becomes very monotonous, and just nothing’s great and nothing’s bad, and you can’t be like that, you got to go through the highs and the lows.  So, this week is going to be enjoyable, but I’m going to just try and get on with playing golf as best I can.

Scott does not believe his achievement is diminished because he did not get the number one ranking during a specific event:

Sure it would have been nice, but all the playing I did added up to this anyway.  It’s just the way the system works.  Sure it would have been awesome to win a tournament and jump to number one like some guys have, but it wasn’t that way.  Hopefully, I can get on and try to win a tournament this week or next week, and start trying to keep myself up on top of the list.

Scott also spoke about how the Tiger effect contributed to the depth of talent on the PGA Tour:

The depth of talent out here…how good everyone is, and how over the last few years I’ve seen the work ethic generally go up a lot.  Guys are working a lot harder, guys are a lot hungrier, and seeing how far they can push themselves out here.  It’s not just based on a bit of talent, there’s a hard work ethic that goes into it.  I’ve seen a lot of guys improve out of sight.  The depth of talent is incredible, and it’s probably got to do with some kind of carry over effect that Tiger has had on the game.  Fifteen years from when he first came out, and now we are seeing guys in their early or mid 20s who have put in a lot of work since they were young and aspiring to be Tiger, and it’s paying off.  And that’s why I think we are seeing a lot more first time winners, it’s a lot more competitive, and it’s just getting harder and harder to be out here.