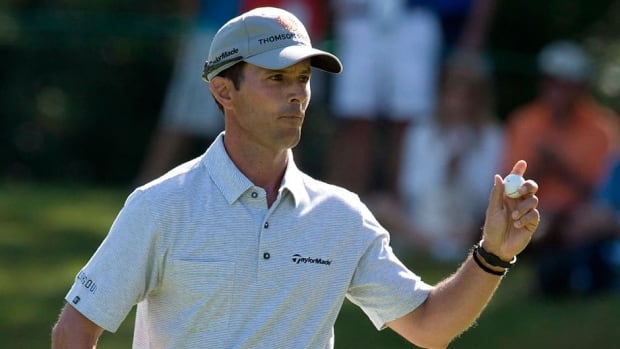 Weir has not finished in the top-10 of a PGA Tour event in over four years because of an injury he sustained in 2010.  At the post-tournament press conference, Weir explained how the torn tendon in his right elbow affected his game physically and mentally:

I hit a tree root at Hilton Head, 2010, and that started it.  I did a number of therapies to try to get through it and play, [but] the tear in my tendon kept getting worse, and Dr. James Andrews down in Pensacola fixed it.  And mentally it just took a while for me to just get after the ball.  It took a long time.  The pattern I developed with not hitting the ground was poor.  I developed some bad patterns in my swing and that’s been the hard cycle to get out of.  I’ve been past that for well over a year, but mentally just to now be free and get back to that…keep chipping away and get back in contention this week has taken a long time.

Weir certainly got past any mental issues today.  He started the final round one back of Brendon Todd and Louis Oosthuizen, and quickly grabbed the lead with birdies on one, two, four, and five.  The birdie on the par-three second was a tap-in after he lipped out for an ace.

As Todd and Marc Leishman heated up on the front nine, Weir fell off the pace with bogeys on six and nine.  A birdie on thirteen got Weir to within two strokes of Todd, but a bogey-birdie combination on fifteen and sixteen kept Weir from a comeback win.

After the round, Weir said, “I played really good golf, best golf I played in a long time.  I was happy with the way I played today.”

At the post-round press conference, Weir also recalled the time he spent with Byron Nelson during the 2004 Champions Dinner at The Masters, “I got to spend the whole evening with him, and that was really special.  I kind of kept that in my heart a little bit out there today.  I would say that he was enjoying the golf, I guess, not just myself but all of us, and I think he would have liked what he saw out there, the competition.”