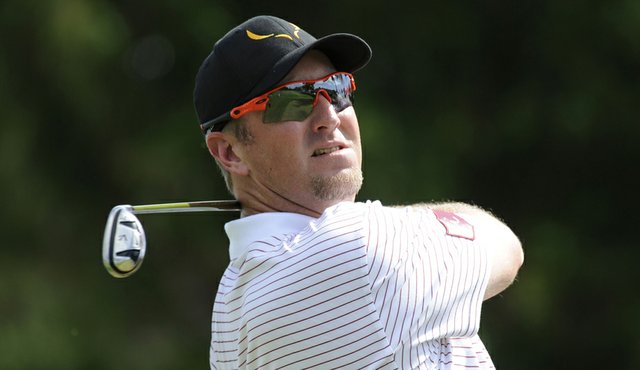 David Duval is fighting injury and a sporadic playing schedule, but remains confident in his game.

David Duval birdied four of his final five holes to shoot a four-under 66 in the opening round of the HP Byron Nelson Championship.  The birdie barrage included chip-ins on five and seven (his back nine), and the 66 placed Duval one back of Peter Hanson heading into the second round.

Duval’s round was impressive because he could barely practice on Tuesday and Wednesday due to a “muscle issue” in his right arm.  After the round on Thursday he said, “It’s fair to say that as of 11:30, a half hour before I was supposed to tee off, I was contemplating if I should play because my arm has been so bad for this week, and it was hurting again.”  Duval went on to mention that the medicine started to take away the pain, and he was able to put together a solid round.

The former world no. 1 is confident in his game, but said one of the challenges is coping with an inconsistent playing schedule, “You can play and practice all you want at home, however, there is a thing to competition, and putting a peg in the ground and putting a pencil to it and playing with the big boys.”  Duval added, “I have the utmost confidence in what I’m trying to do right now, and I feel like I can succeed even with that sporadic schedule.”

Unfortunately, Duval was unable to carry the momentum from his Thursday round into today.  He carded a 76 with seven bogeys and one birdie to drop outside the projected cut line of one-over par.