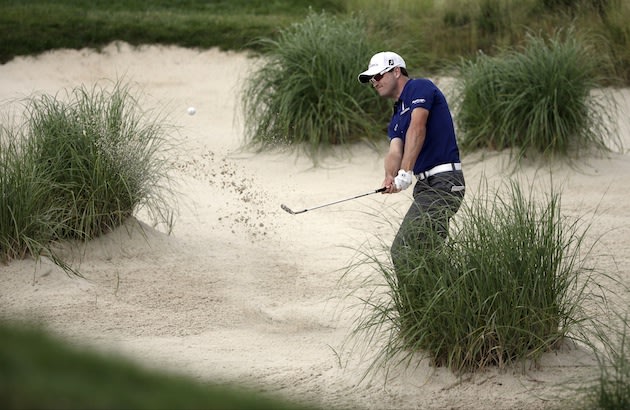 Zach woofing his was out of one of Merion’s particularly hazardous hazards.

Finally. Someone said it.

Former Masters champ Zach Johnson made the most of his post-round media obligations yesterday evening by taking the USGA to task for transforming Merion from a nuanced test of golf into a predictably gruelling, one-note US Open layout.

“I would describe the whole golf course as manipulated… It just enhances my disdain for the USGA and how it manipulates golf courses,” Johnson, who ended his 36-hole cameo at the tournament on 11-over-par, told the Golf Channel’s Randall Mell.

When asked if the setup was “fair” — a term much used and abused on US Open weeks — the nine-time PGA Tour winner was quick to answer in the negative:

“Not when luck is required. I think Merion is a great golf course if you let Merion be, but that is not the agenda.”

People who’ve invested something in the USGA’s branding of its flagship event as the toughest examination in golf will find fault with Johnson’s comments (in fact, they already have) — which is understandable: they were made in the wake of a fairly catastrophic showing, after all. Accusations of sour grapes are bound to feature, so too cliches about “respect” and “earning the right to criticize”.

His point, however, isn’t that the course is impossible to play, merely that the USGA is leaning on luck and disproportionately harsh penalties to a far greater extent than they should.

This incarnation of Merion doesn’t recognise the difference between the good and the passable, the bad and the downright ugly; the only distinction to be made is that between perfection and imperfection. The margins are so impossibly fine as to guarantee most good shots go unrewarded.

Broadly speaking, a drive pushed a yard wide of the fairway is as likely to result in a bogey or worse as that carved a further ten yards off line.

And when that’s the impossibly high standard by which the field is being judged, the aggregate effect of luck on the final outcome is guaranteed to be significant.

When it comes to appraising the US Open, an odd strain of sadism too often calls the shots. We want to see the best players in the world suffer — suffer, perhaps, as we do en route to nett 80s in the club medal. It’s an understandable impulse, but when it’s wielded as a philosophy, the line separating punishment from outright abuse is easily crossed.