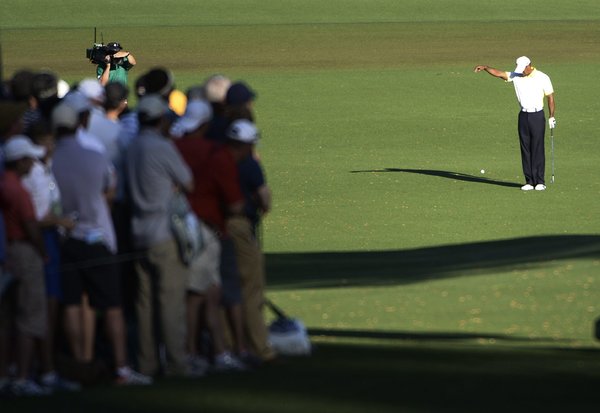 Without wanting to rekindle debate on the hot rules controversy of two months ago (Tiger + illegal drop = mediapocalypse),  it’s worth freezing a HD camera in the direction of this column by AP sportswriter Jim Litke.

Wandering Merion in search of an angle Thursday, he happened upon the USGA rules compound, where phone-in queries and accusations are becoming something of a nuisance.

“At the U.S. Open on Thursday, the claim by at least one viewer that Steve Stricker took an illegal drop at No. 3 found its way to the USGA rules committee. Later the same day, as many as a half-dozen other viewers contended Adam Scott grounded his club in a hazard at No. 5. After reviewing both shots, the USGA decided no violation occurred.”

Playing under constant threat of trial by Tivo, some competitors aren’t happy with the status quo.

“‘It’s part of the game,’ Geoff Ogilvy said. ‘But I don’t think anybody likes it.’

‘I don’t think it’s the best thing,’ said [Adam] Scott, who proposed having rules officials watch the coverage the way replay officials in sports like football, and to a lesser extent, baseball and hockey do.

While Litke goes on to suggest golf’s governing bodies move to push armchair referees to the sidelines, I’m more inclined to accept them as a necessary evil.

Many are misguided pedants, sure; but they do unearth the occasional instance of ignorance or outright malfeasance. Plus, there are procedures in place to account for those infractions that push the limits of visibility (see Rule 33-7).