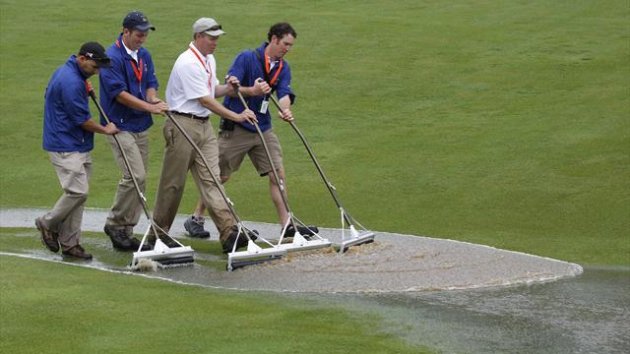 With Merion having weathered somewhere in the region of 6.5 inches of rain over the last week or so, “mud balls” — balls that have accumulated what scientiests refer to as “a splodge” of mud on landing, leaving their stewards with all sorts of tricky arithmetic and guesswork to conduct — could play a big part in determining the tournament’s outcome.

But how do they work, exactly? And is it possible to turn the silty stuff to your advantage? Golf Digest’s Mike Strachura went in search of answers and turned up an interesting blog post.

Rock Ishii, head of Nike’s golf ball research, is the man to talk to, apparently.

“‘It all depends on how much mud is on the ball,’ he says, indicating the distance loss on a 200-yard shot might be as much as eight yards and that if there’s mud on top of the ball a shot will tend to spin too much and balloon up in the air. He also believes the ball will curve in the opposite direction of the side of the ball the mud is on…’

There is a caveat, though. A pretty sizeable one, in fact.

‘”That’s the basic tendency, but if there is too much mud, the ball starts going the same direction as the side the mud gets on. We don’t have enough knowledge what amount of mud turns it to the opposite.'”