LAST SUNDAY, NORTHERN Ireland’s Michael Hoey fended off the a handful of major winners to claim one of the European Tour’s most lucrative events, the Dunhill Links Championship, at St. Andrews’ Old Course.

The Road Hole, the Swilken Bridge, a blistering finish that saw him notch three birdies in the final four holes to see off the challenge of the reigning US Open champion: the wildest of golfing dreams rarely tick so many boxes.

But as surreal an experience as it may have been, Hoey’s performance was less the product of chance or a fleeting alignment of the stars than it was just reward for nearly a decade spent toiling in the golfing wilderness and a talent that’s long been the envy of his peers.

While moonlighting for the good people at The Score, I caught up with new world number 98 two days removed from his headline-grabbing breakthrough.

How are things? Still coming to terms with the win?

Has it sunk in yet?

Not really. It’ll begin to hit me next week, I’d say, when I get caddies and players coming up to me to say congratulations.

If we can to take a quick flashback to Sunday morning: how were you feeling on the first tee? You had Graeme [McDowell] there, who’s a close friend, but I’m guessing you can’t have been feeling too relaxed.

Oh, there were nerves  alright. It’s different on a Sunday, but you always get nervous on the first at St. Andrews. You’re there in front of the Royal and Ancient, trying to pick your spot on the fairway… I was even nervous teeing off there on Thursday.

So, how did you go about calming yourself down?

I didn’t properly settle down until I made bogey on the seventh. It’s strange, but sometimes it takes a bad score on a hole can calm you down and help you focus.

Hoey's approach to the eighteenth at Carnoustie.

I’ve read that, after you were caught, you began to think about second and third place prizemoney. Is that true?

Well, yeah. When you’ve got someone like Rory McIlroy out there making a load of birdies, you kind of expect him to keep on going. I began to tell myself that, even if I didn’t win, second or third place would still be massive. I’ve won a couple of times on Tour before, but first prize at Madeira, for example, was only worth about a third of second place last week.

You hit a driver off the deck on the 14th hole of the final round. It worked out alright, but… what were you thinking?!

You know, I’d been practicing that shot all week– I hit it on the range at Kingsbarns and played it on Thursday. The ball comes out low and running; it’s the perfect shot for the links. I thought that if I could put it in play, I’d have a bit of an advantage over some of the other guys.

Practice– even Thursday afternoon– is one thing, but you were chasing the US Open champion for the biggest prize of your career…

Yeah, but sometimes you’ve just got to say “Fuck it!” and go with it…

Granted, if it didn’t come off, I would have looked like an idiot.

A few holes later, you birdie the last to take the biggest prize of your career. What, if anything, were you feeling?

It was a huge relief, obviously, but I had to take a moment to ask myself “Am I comfortable with this?”

I’d been in the zone, focused on the shots I was playing, but I’d always dreamed of winning a big tournament– a Dunhill Links, an Irish or Scottish Open– and had to take a moment to process it, let it sink in.

You’ve always been known as player with a huge amount of talent and potential. Has that feeling of focus been something you’ve lacked in the past?

What I’ve lacked has been consistency. I don’t have a problem getting focused when I’m in contention, I just haven’t been able to do it often enough. 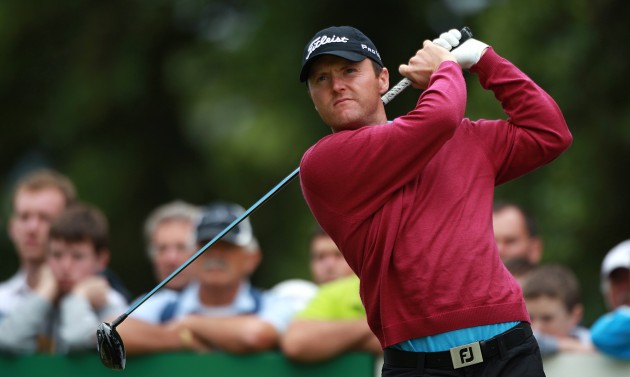 In action at this year’s Irish Open. (Nick Potts/PA Wire)

So improved consistency is the new goal?

Definitely. It comes down to the short-game and keeping it sharp.

I really want to play in The Open next year. The top-30 on the money list qualify and I’m thirteenth at the moment… [pauses to do mental arithemetic]. I might have qualified, already, but I want to be certain. I love links golf and not having to go through the qualification process makes a huge difference– there are only 12 spots between 100 guys.

You endured a tough few years after turning pro; that can’t have been easy.

No, it was really tough. People know that missing the cut means that you don’t get paid, but what they don’t hear about is what it costs you. It works out at about €1,500 a week, minimum. So, by the time you miss three or four cuts in a row, you can begin to get really down.

Luke Donald and Graeme [McDowell] [who were both teammates of Hoey’s on the 2001 Walker Cup team] were really successful early on, but apart from them and, maybe, Sergio [Garcia], Rory [McIlroy] and [Paul] Casey, nobody’s been able to go out on Tour and make millions straight away.

You go from being top of  the pile to the bottom. Nobody cares about your amateur record.

I was really lucky in that I had a couple of great sponsors– Irish Life and the Irish Sports Council– to help me through. Between their help and the odd good finish, I was just about able to keep going.

Did you ever think about packing it in?

There were a lot of times when I thought about it. Sometimes you just want that regular income, to get off the crazy rollercoaster of living from finish to finish.

Golf was never meant to be played professionally. It was a leisure game, a game of patience– like snooker– with a lot of waiting around and walking between shots. When it’s not going well and you’re alone with your thoughts, it can get really lonely out there. You just have to keep believing in your ability.

How do you stop it consuming you, then? How do you get away from it?

That’s probably my biggest problem: I don’t have enough interests. I’m reading those Lee Child novels at the moment– easy reading, you might call it– and I like cars and stuff, but I’m not the best at switching off.

Actually, I got married at Christmas and my wife, Bev, has been introducing me to more things. She’s getting me into hiking– you know, with sticks and things– which is good for your fitness and it keeps me outdoors, which I like. It’s very relaxing.

Your no adrenalin junkie, then?

[Protesting] I drive an M3! I like the feeling of acceleration.

(Reproduced with permission from TheScore.ie)